Complexity and Expressivity of Uniform One-Dimensional Fragment with Equality 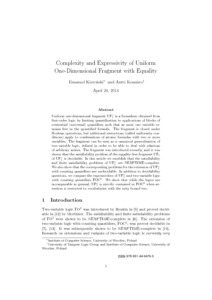 Uniform one-dimensional fragment UF is a formalism obtained from first-order logic by limiting quantification to applications of blocks of existential (universal) quantifiers such that at most one variable remains free in the quantified formula. The fragment is closed under Boolean operations, but additional restrictions (called uniformity conditions) apply to combinations of atomic formulas with two or more variables. The fragment can be seen as a canonical generalization of two-variable logic, defined in order to be able to deal with relations of arbitrary arities. The fragment was introduced recently, and it was shown that the satisfiability problem of the equality-free fragment of UF is decidable. In this article we establish that the satisfiability and finite satisfiability problems of UF are NEXPTIME-complete. We also show that the corresponding problems for the extension of UF with counting quantifiers are undecidable. In addition to decidability questions, we compare the expressivities of UF and two-variable logic with counting quantifiers FOC^2. We show that while the logics are incomparable in general, UF is strictly contained in FOC^2 when attention is restricted to vocabularies with the arity bound two.