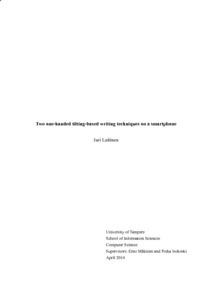 Text entry is a vital part of operating a mobile device, and is often done using a virtual keyboard such as QWERTY. Text entry using the virtual keyboard often faces difficulties, as the size of a single button is small and intangible, which can lead to high error rates and low text entry speed.

This thesis reports a user experiment of two novel tilting-based text entry techniques with and without button press for key selection. The experiment focused on two main issues: 1) the performance of the tilting-based methods in comparison to the current commonly used reference method, the virtual QWERTY keyboard; and 2) evaluation of subjective satisfaction of the novel methods. The experiment was conducted using TEMA software running on an Android smartphone with a relativity small screen size. All writing was done with one hand only.

The participants were able to comprehend and learn to use the new methods without any major problems. The development of text entry skill with the new methods was clear, as the mean text entry rates improved by 63-80 percent. The reference method QWERTY remained fastest of the three throughout the experiment. The tilting-based technique with key press for selection had the lowest total error rate at the end of the experiment, closely followed by QWERTY. Interview and questionnaire results showed that in some cases the tilting-based method was the preferred method of the three.

Many of the shortcomings of tilt-based methods found during the experiment can be addressed in further development, and these methods are likely to prove competitive on devices with very small displays. Tilting has a potential as part of other interaction techniques besides text entry, and could be used to increase bandwidth between the device and the user without significantly increasing the cognitive load.