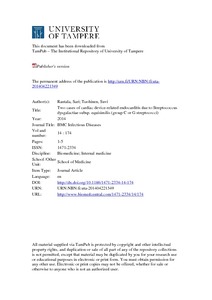 The first case is a 79-year-old finnish woman who received a dual-chamber pacemaker for intermittent complete heart block in April 2011. She had three episodes of S. dysgalactiae subsp. equisimilis bacteremia. During first episode she had arthritis of glenohumeral joint. Focus was unknown in the second and third bacteremic episodes. During third bacteremic episode transesophageal echocardiography (TEE) revealed lead vegetation. Patient underwent successful complete system removal. She was treated with benzylpenicillin four million IU six times a day for four weeks intravenously. The second case is a 92-year-old finnish man. A dual-chamber pacemaker was implanted on June 2012 due to total heart block. He had recurrent S. dysgalactiae subsp. equisimilis bacteremia with cellulitis. During the second bacteremic episode transthoracic echocardiography (TTE) was performed because of persistent fever. Echocardiography revealed lead vegetation. Abdominal CT revealed also an abscess in the psoas region. This elderly patient was very fragile, and the pacemaker system was not extracted. Therapy was continued with benzylpenicillin four million IU six times a day for six weeks intravenously and thereafter suppressive treatment with amoksisillin 500 mg three times a day was initiated.
Conclusion