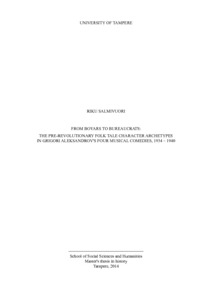 In my master's thesis I study the society of the 1930s Soviet Union through its film culture's relation to the pre-revolutionary folk culture's traditional tale telling. My aim is to find out how the pre-revolutionary culture was reflected in the films. On the one hand the study approaches this question through the official Soviet concepts of the 1930s: the attempt to build a "new society" and through education create a whole "new man". On the other hand, it supposes that hundreds of years of folk tradition will not simply vanish by the politicians setting such ambitious political aims. Therefore the aim is to study the films, a popular tool of education and definitely a representative of the officially sanctioned culture, in order to find out what traces were left of the pre-revolutionary culture in them and how they were used in the films. The conclusions drawn on this small sample can further be used to consider what actually was new in the new society and the new man.

Both the Soviet Union and Russian folk culture are themes thoroughly studied and discussed but rarely compared. This study attempts to combine these two different discussions into a synthesis in order to arrive at new questions and conclusions based on them. Due to the large concepts discussed in the thesis, the primary sources are approached with the methods of narrative analysis and qualitative approach. The focus of the source analysis is on the films' characters because these have the greatest educational impact in the stories concerning both the ideals of the new man as well as the new society. The films chosen for the study, the four musical comedies of Grigori Aleksandrov, have been chosen mainly on the basis of availability, their known great popularity among the contemporary audiences and the fact that they are easy to study seeing that they all come from one author. The pre-revolutionary tales are mostly covered with the help of the existing literature on them.

The study shows that the pre-revolutionary culture was still vigorous in the new society's new art, and the choice to use the archetypes and motifs from the past was likely an intentional one. Despite of stressing the importance of matters being new in the Soviet Union, the ideals of the new man and the new society were still based in many ways on ideas which were already familiar to the audiences from the folk culture and could therefore be utilized in the films without creating a contradiction. Despite of the Soviet film industry having both technical and social prerequisites for becoming something genuinely new and never seen before, the old man of the past still had a lot to give to the new man of the future.