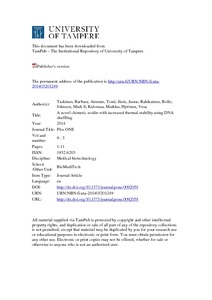 Avidins are a family of proteins widely employed in biotechnology. We have previously shown that functional chimeric mutant proteins can be created from avidin and avidin-related protein 2 using a methodology combining random mutagenesis by recombination and selection by a tailored biopanning protocol (phage display). Here, we report the crystal structure of one of the previously selected and characterized chimeric avidin forms, A/A2-1. The structure was solved at 1.8 Å resolution and revealed that the protein fold was not affected by the shuffled sequences. The structure also supports the previously observed physicochemical properties of the mutant. Furthermore, we improved the selection and screening methodology to select for chimeric avidins with slower dissociation rate from biotin than were selected earlier. This resulted in the chimeric mutant A/A2-B, which showed increased thermal stability as compared to A/A2-1 and the parental proteins. The increased stability was especially evident at conditions of extreme pH as characterized using differential scanning calorimetry. In addition, amino acid sequence and structural comparison of the chimeric mutants and the parental proteins led to the rational design of A/A2-B I109K. This mutation further decreased the dissociation rate from biotin and yielded an increase in the thermal stability.