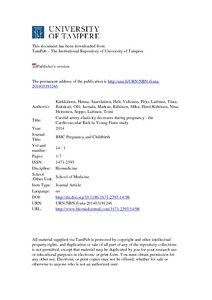 The aims were to evaluate the effect of pregnancy on carotid artery elasticity and determine the associations between maternal lipids, endothelial function and arterial elasticity during pregnancy.
METHODS:

SI was 57% and YEM 75% higher and CAD 36% lower in the third trimester group than the corresponding values in the first trimester group. Serum cholesterol and triglyceride levels were significantly higher in women at the end of the pregnancy than at the beginning of pregnancy (P < 0.001) and in controls (P < 0.001). In multivariate analysis, gestational age was the only independent correlate of arterial elasticity in pregnant women. In controls, age (P ≤ 0.001) and common carotid diameter (P = 0.001-0.029) were associated with SI, YEM and CAD.
CONCLUSIONS:

The present study revealed that carotid artery elasticity declined towards the end of the pregnancy; this neither is straight correlating with maternal hyperlipidemia or the diameter of the carotid artery nor is it associated with changes in endothelial function.