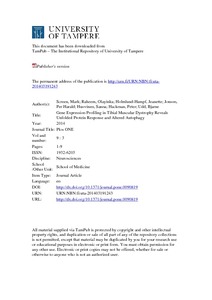 Tibial muscular dystrophy (TMD) is a late onset, autosomal dominant distal myopathy that results from mutations in the two last domains of titin. The cascade of molecular events leading from the causative Titin mutations to the preterm death of muscle cells in TMD is largely unknown. In this study we examined the mRNA and protein changes associated with the myopathology of TMD. To identify these components we performed gene expression profiling using muscle biopsies from TMD patients and healthy controls. The profiling results were confirmed through quantitative real-time PCR and protein level analysis. One of the pathways identified was activation of endoplasmic reticulum (ER) stress response. ER stress activates the unfolded protein response (UPR) pathway. UPR activation was supported by elevation of the marker genes HSPA5, ERN1 and the UPR specific XBP1 splice form. However, UPR activation appears to be insufficient to correct the protein abnormalities causing its activation because degenerative TMD muscle fibres show an increase in ubiquitinated protein inclusions. Abnormalities of VCP-associated degradation pathways are also suggested by the presence of proteolytic VCP fragments in western blotting, and VCP's accumulation within rimmed vacuoles in TMD muscle fibres together with p62 and LC3B positive autophagosomes. Thus, pathways controlling turnover and degradation, including autophagy, are distorted and lead to degeneration and loss of muscle fibres.