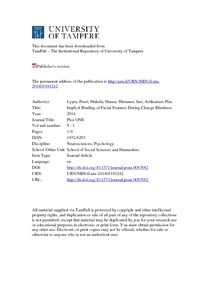 Change blindness refers to the inability to detect visual changes if introduced together with an eye-movement, blink, flash of light, or with distracting stimuli. Evidence of implicit detection of changed visual features during change blindness has been reported in a number of studies using both behavioral and neurophysiological measurements. However, it is not known whether implicit detection occurs only at the level of single features or whether complex organizations of features can be implicitly detected as well. We tested this in adult humans using intact and scrambled versions of schematic faces as stimuli in a change blindness paradigm while recording event-related potentials (ERPs). An enlargement of the face-sensitive N170 ERP component was observed at the right temporal electrode site to changes from scrambled to intact faces, even if the participants were not consciously able to report such changes (change blindness). Similarly, the disintegration of an intact face to scrambled features resulted in attenuated N170 responses during change blindness. Other ERP deflections were modulated by changes, but unlike the N170 component, they were indifferent to the direction of the change. The bidirectional modulation of the N170 component during change blindness suggests that implicit change detection can also occur at the level of complex features in the case of facial stimuli.