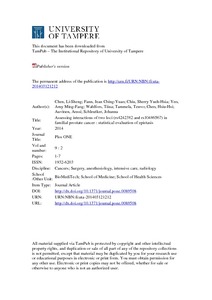 Understanding the impact of multiple genetic variants and their interactions on the disease penetrance of familial multiple prostate cancer is very relevant to the overall understanding of carcinogenesis. We assessed the joint effect of two loci on rs4242382 at 8q24 and rs10486567 at 7p15.2 to this end. We analyzed the data from a Finnish family-based genetic study, which was composed of 947 men including 228 cases in 75 families, to evaluate the respective effects of the two loci on the disease penetrance; in particular, the occurrence and number of prostate cancer cases within a family were utilized to evaluate the interactions between the two loci under the additive and multiplicative Poisson regression models. The risk alleles A at rs4242382 (OR = 1.14, 95% CI 1.08–1.19, P<0.0001) and a risk allele A at rs10486567 (OR = 1.06, 96%CI 1.01–1.11, P = 0.0208) were found to be associated with an increased risk of familial PrCa, especially with four or more cases within a family. A multiplicative model fitted the joint effect better than an additive model (likelihood ratio test X2 = 13.89, P<0.0001). The influence of the risk allele A at rs10486567 was higher in the presence of the risk allele A at rs4242382 (OR = 1.09 (1.01–1.18) vs. 1.01 (0.95–1.07)). Similar findings were observed in non-aggressive PrCa, but not in aggressive PrCa. We demonstrated that two loci (rs4242382 and rs10486567) are highly associated with familial multiple PrCa, and the gene-gene interaction or statistical epistasis was consistent with the Fisher's multiplicative model. These loci's association and epistasis were observed for non-aggressive but not for aggressive tumors. The proposed statistical model can be further developed to accommodate multi-loci interactions to provide further insights into epistasis.