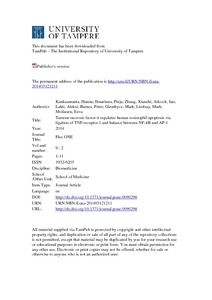 Eosinophils play a central role in asthma. The present study was performed to investigate the effect of tumour necrosis factor-α (TNF-α) on longevity of isolated human eosinophils. In contrast to Fas, TNF-α inhibited eosinophil apoptosis as evidenced by a combination of flow cytometry, DNA fragmentation assay and morphological analyses. The effect of TNF-α on eosinophil apoptosis was reversed by a TNF-α neutralising antibody. The anti-apoptotic effect of TNF-α was not due to autocrine release of known survival-prolonging cytokines interleukins 3 and 5 or granulocyte-macrophage-colony-stimulatin​gfactor as their neutralisation did not affect the effect of TNF-α. The anti-apoptotic signal was mediated mainly by the TNF-receptor 1. TNF-α induced phosphorylation and degradation of IκB and an increase in NF-κB DNA-binding activity. The survival-prolonging effect of TNF-α was reversed by inhibitors of NF-κB pyrrolidinedithiocarbamate and gliotoxin and by an inhibitor of IκB kinase, BMS-345541. TNF-α induced also an increase in AP-1 DNA-binding activity and the antiapoptotic effect of TNF-α was potentiated by inhibitors of AP-1, SR 11302 and tanshinone IIA and by an inhibitor of c-jun-N-terminal kinase, SP600125, which is an upstream kinase activating AP-1. Our results thus suggest that TNF-α delays human eosinophil apoptosis via TNF-receptor 1 and the resulting changes in longevity depend on yin-yang balance between activation of NF-κB and AP-1.