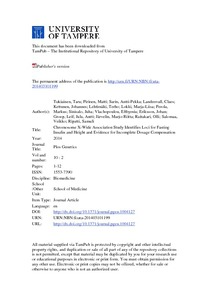 The X chromosome (chrX) represents one potential source for the “missing heritability” for complex phenotypes, which thus far has remained underanalyzed in genome-wide association studies (GWAS). Here we demonstrate the benefits of including chrX in GWAS by assessing the contribution of 404,862 chrX SNPs to levels of twelve commonly studied cardiometabolic and anthropometric traits in 19,697 Finnish and Swedish individuals with replication data on 5,032 additional Finns. By using a linear mixed model, we estimate that on average 2.6% of the additive genetic variance in these twelve traits is attributable to chrX, this being in proportion to the number of SNPs in the chromosome. In a chrX-wide association analysis, we identify three novel loci: two for height (rs182838724 near FGF16/ATRX/MAGT1, joint P-value = 2.71×10−9, and rs1751138 near ITM2A, P-value = 3.03×10−10) and one for fasting insulin (rs139163435 in Xq23, P-value = 5.18×10−9). Further, we find that effect sizes for variants near ITM2A, a gene implicated in cartilage development, show evidence for a lack of dosage compensation. This observation is further supported by a sex-difference in ITM2A expression in whole blood (P-value = 0.00251), and is also in agreement with a previous report showing ITM2A escapes from X chromosome inactivation (XCI) in the majority of women. Hence, our results show one of the first links between phenotypic variation in a population sample and an XCI-escaping locus and pinpoint ITM2A as a potential contributor to the sexual dimorphism in height. In conclusion, our study provides a clear motivation for including chrX in large-scale genetic studies of