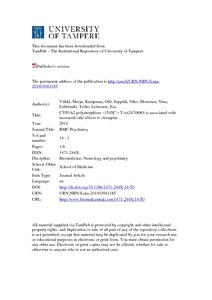 Cytochrome P450 1A2 gene (CYP1A2) polymorphisms have been suggested to be associated with increased side effects to antipsychotics. However, studies on this are scarce and have been conducted with either various antipsychotics or only in small samples of patients receiving clozapine. The aim of the present study was to test for an association between the CYP1A2 −1545C > T (rs2470890) polymorphism and side effects in a larger sample of patients during long-term clozapine treatment.
Methods

A total of 237 patients receiving clozapine treatment completed the Liverpool University Neuroleptic Side-Effect Rating Scale (LUNSERS) assessing clozapine-induced side effects. Of these patients, 180 completed the questionnaire satisfactorily, agreed to provide a blood sample, and were successfully genotyped for the polymorphism.
Results

This study has identified an association between the CYP1A2 polymorphism −1545C > T (rs2470890) and the occurrence of more severe clozapine side effects. However, these results should be regarded as tentative and more studies of larger sample sizes will be required to confirm the result.