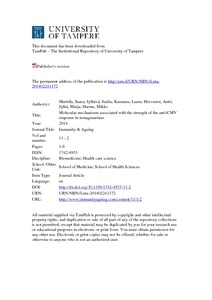 The level of the anti-CMV IgG titre is associated with the expression level of 663 transcripts in nonagenarians. These transcripts and their corresponding pathways are, for the most part, associated with metabolic functions, cell development and proliferation and other basic cellular functions. However, no prominent associations with the immune system were found, and no associated transcripts were found in young controls.
Conclusions

The lack of defence pathways associated with the strength of the anti-CMV response can indicate that the compromised immune system can no longer defend itself against the CMV infection. Our data imply that the association between high anti-CMV IgG titres and increased mortality and frailty is mediated by basic cellular processes.