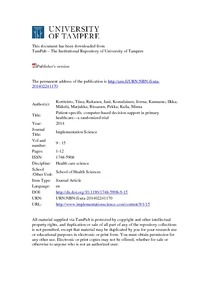 Computer-based decision support systems are a promising method for incorporating research evidence into clinical practice. However, evidence is still scant on how such information technology solutions work in primary healthcare when support is provided across many health problems. In Finland, we designed a trial where a set of evidence-based, patient-specific reminders was introduced into the local Electronic Patient Record (EPR) system. The aim was to measure the effects of such reminders on patient care. The hypothesis was that the total number of triggered reminders would decrease in the intervention group compared with the control group, indicating an improvement in patient care.
Methods

From July 2009 to October 2010 all the patients of one health center were randomized to an intervention or a control group. The intervention consisted of patient-specific reminders concerning 59 different health conditions triggered when the healthcare professional (HCP) opened and used the EPR. In the intervention group, the triggered reminders were shown to the HCP; in the control group, the triggered reminders were not shown. The primary outcome measure was the change in the number of reminders triggered over 12 months. We developed a unique data gathering method, the Repeated Study Virtual Health Check (RSVHC), and used Generalized Estimation Equations (GEE) for analysing the incidence rate ratio, which is a measure of the relative difference in percentage change in the numbers of reminders triggered in the intervention group and the control group.
Results

In total, 13,588 participants were randomized and included. Contrary to our expectation, the total number of reminders triggered increased in both the intervention and the control groups. The primary outcome measure did not show a significant difference between the groups. However, with the inclusion of patients followed up over only six months, the total number of reminders increased significantly less in the intervention group than in the control group when the confounding factors (age, gender, number of diagnoses and medications) were controlled for.
Conclusions

Computerized, tailored reminders in primary care did not decrease during the 12 months of follow-up time after the introduction of a patient-specific decision support system.