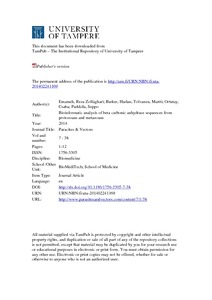 Despite the high prevalence of parasitic infections, and their impact on global health and economy, the number of drugs available to treat them is extremely limited. As a result, the potential consequences of large-scale resistance to any existing drugs are a major concern. A number of recent investigations have focused on the effects of potential chemical inhibitors on bacterial and fungal carbonic anhydrases. Among the five classes of carbonic anhydrases (alpha, beta, gamma, delta and zeta), beta carbonic anhydrases have been reported in most species of bacteria, yeasts, algae, plants, and particular invertebrates (nematodes and insects). To date, there has been a lack of knowledge on the expression and molecular structure of beta carbonic anhydrases in metazoan (nematodes and arthropods) and protozoan species.
Methods

Here, the identification of novel beta carbonic anhydrases was based on the presence of the highly-conserved amino acid sequence patterns of the active site. A phylogenetic tree was constructed based on codon-aligned DNA sequences. Subcellular localization prediction for each identified invertebrate beta carbonic anhydrase was performed using the TargetP webserver.
Results

We verified a total of 75 beta carbonic anhydrase sequences in metazoan and protozoan species by proteome-wide searches and multiple sequence alignment. Of these, 52 were novel, and contained highly conserved amino acid residues, which are inferred to form the active site in beta carbonic anhydrases. Mitochondrial targeting peptide analysis revealed that 31 enzymes are predicted with mitochondrial localization; one was predicted to be a secretory enzyme, and the other 43 were predicted to have other undefined cellular localizations.
Conclusions

These investigations identified 75 beta carbonic anhydrases in metazoan and protozoan species, and among them there were 52 novel sequences that were not previously annotated as beta carbonic anhydrases. Our results will not only change the current information in proteomics and genomics databases, but will also suggest novel targets for drugs against parasites.