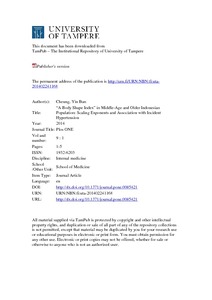 "A Body Shape Index" (ABSI) is a recently proposed index that standardizes waist circumference for body mass index (BMI) and height. This study aims to: (a) examine if the ABSI scaling exponents for standardizing waist circumference for BMI and height are valid in middle-aged and older Indonesian population, and (b) compare the association between incident hypertension and ABSI and other anthropometric measures.
METHODS AND FINDINGS:

The Indonesian Family Life Survey Wave 3 measured anthropometric variables and blood pressure of 8255 adults aged between 40 to 85 years in 2000. The relationship between two anthropometric quantities, e.g. weight (w) and height (h), can be expressed as the power law-equivalent [Formula: see text], where p = 2 is the scaling exponent in the derivation of the BMI and can be estimated by linear regression analysis. This was extended to the regression analysis of the log-transformed waist circumference, weight and height to establish the scaling exponents in the ABSI. The values for men were similar to those developed by the previous American study, which were 2/3 (BMI) and 1/2 (height). Those for women were somewhat smaller, at 3/5 (BMI) and 1/5 (height). The original (American) ABSI leads to mild negative correlation with BMI (-0.14) and height (-0.12) in the female population. Analysis of the development of hypertension between Waves 3 and 4 (average interval 7.5 years) in relation to ABSI measured at Wave 3 showed stronger association if the locally derived (Indonesian) scaling exponents were used. However, both versions of the ABSI were less associated with incident hypertension than waist circumference and BMI.
CONCLUSIONS:

The values for the scaling exponents for ABSI are roughly similar between the American population and the middle-aged and older Indonesian population, although larger discrepancy was found in women. The ABSI is less associated with incident hypertension than waist circumference and BMI.