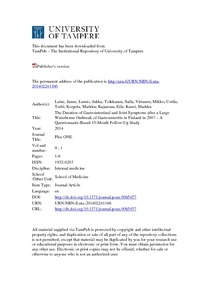 An extensive drinking water-associated gastroenteritis outbreak took place in the town of Nokia in Southern Finland in 2007. 53% of the exposed came down with gastroenteritis and 7% had arthritis-like symptoms (joint swelling, redness, warmth or pain in movement) according to a population-based questionnaire study at 8 weeks after the incident. Campylobacter and norovirus were the main pathogens.

A follow-up questionnaire study was carried out 15 months after the outbreak to evaluate the duration of gastrointestinal and joint symptoms. 323 residents of the original contaminated area were included. The response rate was 53%. Participants were inquired about having gastroenteritis during the outbreak and the duration of symptoms.

High proportion of respondents continued to have arthritis-like symptoms at 15 months after the epidemic. The gastrointestinal symptoms, instead, had declined to a low level.