Change management in the implemenation of university reforms 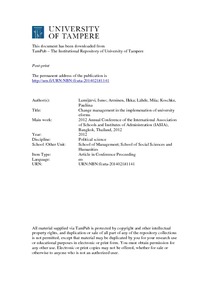 The study considers the nature of the universities’ structural changes and their effects, especially in the Finnish university world. The objectives for empirical study were two universities which have changed to become owned by foundations. It can be noted of the structural changes made that as reforms they have been extensive, holist ic and with longterm effects. The changes can be said to have been proactive and strategic. They have circumscribed frames and also produced new opportunities which will only later assume a concrete form. Efforts were made to implement the changes consistently and in a
centralized manner. Here the reform policy is reminiscent of the traditional reform policy of the state administration. The changes have been po litical in nature as they determined anew the relation between the state and the university and introduced external parties to direct the internal administration of the universities. The reforms were processed in the
universities several years prior to the new legislat ion. Nevertheless it is difficult to consider them to be internally originated, innovative or unique because the reforms largely adhere to the same features already implemented in other OECD countries in earlier years. By Finnish standards the reforms have all in all been significant. Nevertheless, adaptation to them seems to have been surprisingly rational and controlled. Resistance to change was rather slight and soon receded where it did occur. The redistribution of leadership responsibilities gave rise to a certain amount of resistance.