20-Years of Population-Based Cancer Registration in Hepatitis B and Liver Cancer Prevention in The Gambia, West Africa 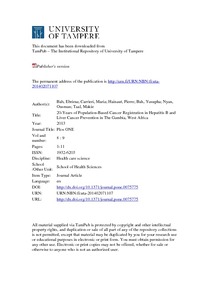 The Gambia Hepatitis Intervention Study (GHIS) was designed as a randomised control trial of infant hepatitis B vaccination applied to public health policy, with the main goal of preventing primary liver cancer later in adult life in The Gambia. To that effect, the National Cancer Registry of The Gambia (NCR), a population-based cancer registry (PBCR), was established in 1986 to actively collect data on all cancer diagnosis nation-wide. We extracted 20-years (1990-2009) of data to assess for the first time, the evolution of the most common cancers, also describe and demonstrate the role of the PBCR in a hepatitis B and liver cancer prevention programme in this population.
Methods and Findings

We estimated Age-Standardised Incidence Rates (ASR (W)) of the most common cancers registered during the period by gender. The registration period was divided into four 5-year intervals and incidence rates were estimated for each interval. The most common cancers in males were liver, prostate, lung plus bronchus, non-Hodgkin lymphoma (NHL) and stomach, accounting for 60%, 5%, 4%, 5% and 3%, respectively. Similarly, cancers of the cervix uteri, liver, breast and NHL, were the most common in females, accounting for 33%, 24%, 11% and 4% of the female cancers, respectively.
Conclusions

Cancer incidence has remained relatively stable over time, but as shown elsewhere in sub-Saharan Africa the disease is a threat in The Gambia. The infection related cancers which are mostly preventable (HBV in men and HPV/HIV in women) were the most common. At the moment the data is not enough to detect an effect of hepatitis B vaccination on liver cancer incidence in The Gambia. However, we observed that monitoring case occurrence through PBCR is a key public health pre-requisite for rational planning and implementation of targeted interventions for improving the health of the population.