Know thyself? Self- and other-ratings of a manager’s work-related personality and their relation to the occupational well-being of subordinates 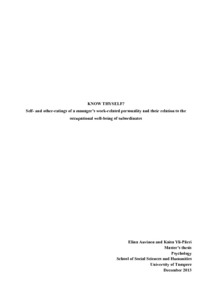 Data were collected in a Finnish public funded expert organization in 2006. Data collection was carried out as a part of a broader personnel survey. The response rate in the personnel survey was 74.4%. The complete data in our study included 144 managers and 702 subordinates (N = 846). All the subordinates’ responses were analyzed as mean scores at a team level, and average team size was 4.94. From those managers who reported their gender, 33 out of 122 managers were women and 89 were men. The average age of the managers was 44 years. The research questions were examined through polynomial regression analysis, response surface tests and multivariate analysis of variance (MANOVA).