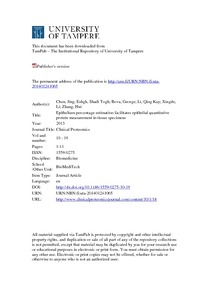 The rapid advancement of high-throughput tools for quantitative measurement of proteins has demonstrated the potential for the identification of proteins associated with cancer. However, the quantitative results on cancer tissue specimens are usually confounded by tissue heterogeneity, e.g. regions with cancer usually have significantly higher epithelium content yet lower stromal content.
Objective

It is therefore necessary to develop a tool to facilitate the interpretation of the results of protein measurements in tissue specimens.
Methods

Epithelial cell adhesion molecule (EpCAM) and cathepsin L (CTSL) are two epithelial proteins whose expressions in normal and tumorous prostate tissues were confirmed by measuring staining intensity with immunohistochemical staining (IHC). The expressions of these proteins were measured by ELISA in protein extracts from OCT embedded frozen prostate tissues. To eliminate the influence of tissue heterogeneity on epithelial protein quantification measured by ELISA, a color-based segmentation method was developed in-house for estimation of epithelium content using H&E histology slides from the same prostate tissues and the estimated epithelium percentage was used to normalize the ELISA results. The epithelium contents of the same slides were also estimated by a pathologist and used to normalize the ELISA results. The computer based results were compared with the pathologist’s reading.
Results