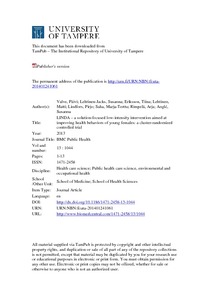 We aimed to develop and evaluate the effectiveness of an individualized, long-term support lifestyle counseling approach in promoting healthy physical activity, improving dietary and sleeping behaviors, and preventing weight gain in young females. The counseling approach's intensity was designed to be low enough to be implementable in primary health care.
METHODS:

Young women (n = 3,059, age at baseline 17-21 years) attending a population-based human papilloma virus vaccination trial (clinicaltrials.gov identifier: NCT00122681) in 15 vaccination centers in different communities across Finland, were cluster-randomized into intervention and control arms of the LINDA intervention. Both intervention and control arms received counseling on sexual health and contraception from the study nurses as part of the vaccination trial. Additionally, the LINDA intervention arm (n = 1,537) received a 20-minute individualized lifestyle counseling session followed by further support at the six-monthly follow-up visits of the vaccination trial, in total for 1.5-2.5 years.The LINDA solution-focused brief therapy intervention focused on healthy physical activity, and dietary and sleeping behaviors, based on the needs and interests of the participants. Anthropometrics were measured, and data on health-related behaviors were collected using self-report questionnaires at baseline and after the intervention at 1.5-2.5 years.
RESULTS:

In the intervention arm, 37% vs. 31% in the control arm made an overall improvement in their health behaviors concerning physical activity, meal regularity and/or earlier bedtime (NNT = 18, 95% CI = 11-50). The per-protocol analysis further revealed that 30% of those who actually received lifestyle change support on healthy physical activity behaviors improved their physical activity level vs. 23% in the control group (NNT = 15, 95% CI = 9-38). Respectively, 36% of those who received support on healthy sleeping behaviors went to sleep earlier before school-/work-days after the intervention vs. 28% in the control group (NNT = 13, 95% CI = 7-61). Dinner irregularity increased in both groups, but less in the intervention group among those who received support on healthy dietary behaviors (NNT = 15, 95%CI = 9-46). There was no effect on weight gain between baseline and study end-point.
CONCLUSIONS: