When communication fails : asymmetric ties in communication process between the executive bodies of the Russian Federation and the Republic of Finland 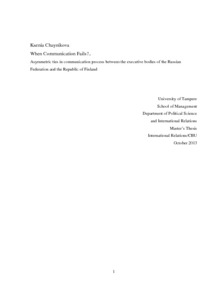 Most different system design introduced by Giovanni Sartori was used in order to dwell upon differences and similarities between Russia and Finland; ladder of abstraction-generalization was used to illustrate the symmetric ties concept. The primary data for the research comprises a number of interviews conducted from March 2013 till May 2013 which helped to reveal the actual communication procedures within and between the closed executive bodies of Finland and Russia.

The findings have shown that asymmetric ties do exist in practice but there are many cases of failure due to a number of reasons. However, once established direct communication process between offices is considered as a template for future collaborations.