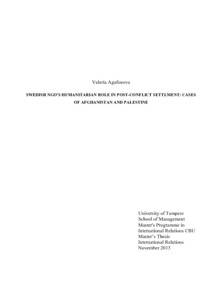 This work focuses on the Swedish humanitarian efforts in Afghanistan and Palestine. Using the cases of Diakonia and SCA I consider long-term NGOs activity in conflict and post conflict regions as development aid with humanitarian approach.

Based upon ideas of social constructivism and new humanitarianism I explore the theory and practice Swedish official and private humanitarian efforts. One of the main principle of social constructivism -the coherence agenda - has been reinterpreted such that humanitarian action have become one of the primary form of political action (rather than merely a substitute for it) and is reflected in a number of substantive changes in the humanitarian architecture. As a result of it Conflict Prevention became the one of the main priorities of Swedish foreign policy and was implemented on the ground, field and in new structure of MFA and SIDA.
Principles of new humanitarianism - right-based approach, result-oriented management and focus on capacity building efforts - are now in the core of Swedish NGOs activities. After more then 30 years of needs based assistance SCA drifts to development goals; meanwhile human rights advocacy efforts became the main priorities for Diakonia . But both NGOs keep the 'heritage' of classical humanitarian principles: unconditional approach to any assistance activity, deep roots in local communities and focus on the commune level. And this 'synthetic' approach lets Swedish NGOs to have more influence then one can expect based upon theirs modest funds.

The main challenge for Swedish NGOs and for Swedish Humanitarian Policy in general is to organize the effective coordination between all actors (including the military ones) in conflict areas. Now the internal struggle within the MFA and SIDA to maintain Conflict Prevention as a security issue or a development one still not finished yet. As a result NGOs and SIDA abstain from joint military-civilian humanitarian operations in conflict areas that reduce assistance efforts in conflict and post-conflict regions.