On the Semantic Basis of Heraldic Propaganda, or What do Arms Mean, and How? 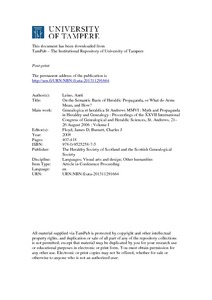 Despite the occasional claim to the contrary, it is clear that a coat of arms often has some semantic content beyond just identifying its bearer. In this respect arms are very much like proper names, and it turns out that some of the linguistic theories used to analyse names can be applied to heraldry as well.

In the past twenty years, cognitive linguistics has gained momentum as a mainstream linguistic paradigm. Its refusal to see a fundamental distinction between language and other human cognition provides a good starting point for a linguistic analysis of heraldry itself, not just the verbal description of arms in blazon. Such an analysis makes it possible to see how various fragments of meaning are incorporated into a coat of arms.