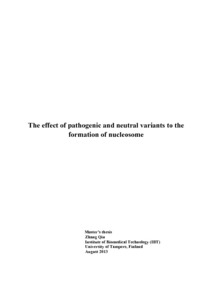 Bioinformatiikka - Bioinformatics
This publication is copyrighted. You may download, display and print it for Your own personal use. Commercial use is prohibited.

Background and Aims: Chromatin contains enormous genetic information, with further folding and compaction processes owing to the special structure of nucleosomes, which ensure the genetic continuity of organisms. The organization of chromatin structures like the nucleosome positioning pattern is found to have critical importance in contributing faithful gene regulations. Nucleosome shows special preference to specific DNA sequences, thus DNA sequence may participate in establishing their positioning patterns. To this concern, analysis of DNA sequence variations associated with nucleosome stability may provide important information underlying the associations. This study was aimed to find out whether pathogenic and neutral variations have different impact on the stability of nucleosome in terms of nucleosome binding affinities and occupancy levels. In addition to this regard, analysis of the variant variability and degree of pathogenicity and thereby possibly providing information for the prediction of pathogenicity of novel variants was one of the concerns in this research.

Methods: Two datasets including neutral and pathogenic variations were obtained from VariBench database. DNA sequences of specified length were downloaded with respective identifiers and were submitted to NuPoP to predict nucleosome positions and attributes. Variations were studied based on the location (within nucleosome core regions and at linker regions). Finally, statistical analysis was performed in R to examine the stability of nucleosome for neutral and pathogenic variations. In addition, variability and degree of pathogenicity of each nucleotide, substitution pattern and dinucleotide were calculated.

Results: There was no obvious difference in variant positions between neutral and pathogenic types along the DNA. Variations occurring inside nucleosomes displayed higher binding affinity and occupancy than variations at linker regions irrespective of the type of variations. Pathogenic variations showed higher nucleosome binding affinity and occupancy than neutral ones. However, significant occupancy difference between pathogenic and neutral variations were not observed for several substitution patterns, e.g. C–>T, G–>A and T–>G. Transition variations showed higher frequency than transversion variations. Three out of four types of transition variations displayed higher probability to cause pathogenic variations; C–>T and G–>A were found to have highest substitution frequencies. CpG was observed with a high variation frequency and is more likely to become pathogenic type. TpG within nucleosome core regions and CpA at linker regions showed most and least pathogenicity, respectively. ApA and GpA might cause different variation types based on the location of variations.