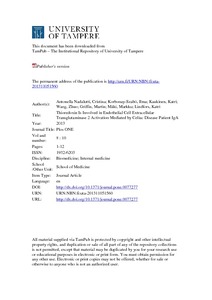 TG2 enzymatic activity was evaluated in endothelial cells (HUVECs) under different experimental conditions by ELISA and Western blotting. Extracellular TG2 expression was studied by ELISA and immunofluorescence. TRX was analysed by Western blotting and ELISA. Serum immunoglobulins class A from healthy subjects (H IgA) were used as controls. Extracellular TG2 enzymatic activity was inhibited by R281. PX12, a TRX inhibitor, was also employed in the present study.
Results

We have found that in HUVECs CD IgA is able to induce the activation of extracellular TG2 in a dose-dependent manner. Particularly, we noted that the extracellular modulation of TG2 activity mediated by CD IgA occurred only under reducing conditions, also needed to maintain antibody binding. Furthermore, CD IgA-treated HUVECs were characterized by a slightly augmented TG2 surface expression which was independent from extracellular TG2 activation. We also observed that HUVECs cultured in the presence of CD IgA evinced decreased TRX surface expression, coupled with increased secretion of the protein into the culture medium. Intriguingly, inhibition of TRX after CD IgA treatment was able to overcome most of the CD IgA-mediated effects including the TG2 extracellular transamidase activity.
Conclusions

Altogether our findings suggest that in endothelial cells CD IgA mediate the constitutive activation of extracellular TG2 by a mechanism involving the redox sensor protein TRX.