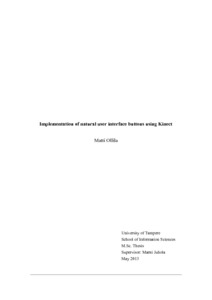 Microsoft Kinect is an add-on component for the Xbox 360 console that enables the use of body gestures and voice commands to control the Xbox device. While majority of Kinect interfaces use full body motions, hand extension type user interfaces also exist.

This thesis attempts to offer alternative means of performing activations in a cursor based hand extension user interface. For that purpose we developed a testing interface containing the two standard controls commonly employed on Kinect's cursor based user interfaces, as well as nine proposed variants of the interface controls, with two of the proposed variant controls being removed during pilot testing as redundant.

The controls were tested on a 20-participant usability study where they were evaluated based on the factors of speed, rate of false activations and user impression. Based on the test results, most of the proposed new controls enabled faster performance but at the cost of a considerable increase in the rate of false activations. While some controls showed promise with further development only the two-handed push button control could rival the low false activation rates of the standard Kinect controls, while simultaneously allowing for much faster activations and being selected by the majority of the test participants as their favourite interaction type.