Designing for In the Wild Gesture-based Interaction: Lessons Learnt from Vuores 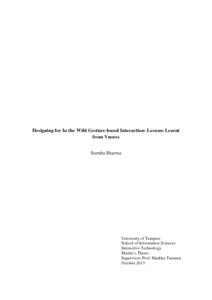 With the emergence of affordable gesture recognition technology, such as the Microsoft Kinect, interactive displays are making their way toin the wildsetting, or public spaces, largely as information systems. It then becomes essential to delve deeper into users perception of these systems and study the aspects that contribute to a rich and pleasant user experience. In addition to the general principles of interaction design, development and installation of such systems requires an understanding of social affordances or social dynamics between an actor and an audience as well as the role of an individual within a group. Interaction affordances or, hints and clues about ways to interact with the system, and technology affordances or, capabilities of current technology, also help build a smooth interaction and rich user experience. The system needs to be exciting and enticing for users to initiate interaction yet simple enough to allow fluent interaction without any prior experience. This thesis explores the opportunities and challenges introduced by interactive public displays systems in the wild by presenting a case study of a gesture-based system, Energyland, which was installed at the month long annual Finnish Housing Fair in the summer of 2012, in Vuores, Finland. By analyzing the data collected from the user experience questionnaire, system logs, informal user interviews and observations made by researchers, I discuss my findings and compare them to previous work in this area. Overall, users responded very positively to the system experience as evident from the questionnaire consisting of seven factors: individuality, authenticity, story, contract, interaction, sound and pleasantness of the system. Users also stated their interests towards using similar systems in the future. Based on the system logs and researcher observations, social, interaction and technology affordances are the building blocks of user experience for in the wild systems, and there should be mechanisms to help users overcome an initial reluctance to interact by presenting interesting and intriguing interactive content. A key finding was the user s attitude towards interaction, namely as a risk into the known, which dictates that installation spaces must provide for a quick and easy escape route. The end result of this thesis is a set of guidelines covering the design, implementation and installation process for similar systems involving interactive public displays.