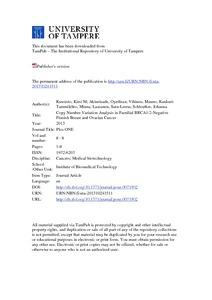 A cohort of 84 HBOC individuals (negative for BRCA1/2-founder mutations and pre-screened for the most common breast cancer genes) and 36 healthy controls were analysed with a genome-wide SNP array. CNV-affecting genes were further studied by Gene Ontology term enrichment, pathway analyses, and database searches to reveal genes with potential for breast and ovarian cancer predisposition. CNVs that were considered to be important were validated and genotyped in 20 additional HBOC individuals (6 CNVs) and in additional healthy controls (5 CNVs) by qPCR.
Results

An intronic deletion in the EPHA3 receptor tyrosine kinase was enriched in HBOC individuals (12 of 101, 11.9%) compared with controls (27 of 432, 6.3%) (OR = 1.96; P = 0.055). EPHA3 was identified in several enriched molecular functions including receptor activity. Both a novel intronic deletion in the CSMD1 tumor suppressor gene and a homozygous intergenic deletion at 5q15 were identified in 1 of 101 (1.0%) HBOC individuals but were very rare (1 of 436, 0.2% and 1 of 899, 0.1%, respectively) in healthy controls suggesting that these variants confer disease susceptibility.
Conclusion

This study reveals new information regarding the germline CNVs that likely contribute to HBOC susceptibility in Finland. This information may be used to facilitate the genetic counselling of HBOC individuals but the preliminary results warrant additional studies of a larger study group