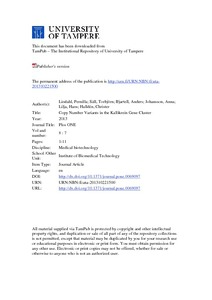 The kallikrein gene family (KLK1-KLK15) is the largest contiguous group of protease genes within the human genome and is associated with both risk and outcome of cancer and other diseases. We searched for copy number variants in all KLK genes using quantitative PCR analysis and analysis of inheritance patterns of single nucleotide polymorphisms. Two deletions were identified: one 2235-bp deletion in KLK9 present in 1.2% of alleles, and one 3394-bp deletion in KLK15 present in 4.0% of alleles. Each deletion eliminated one complete exon and created out-of-frame coding that eliminated the catalytic triad of the resulting truncated gene product, which therefore likely is a non-functional protein. Deletion breakpoints identified by DNA sequencing located the KLK9 deletion breakpoint to a long interspersed element (LINE) repeated sequence, while the deletion in KLK15 is located in a single copy sequence. To search for an association between each deletion and risk of prostate cancer (PC), we analyzed a cohort of 667 biopsied men (266 PC cases and 401 men with no evidence of PC at biopsy) using short deletion-specific PCR assays. There was no association between evidence of PC in this cohort and the presence of either gene deletion. Haplotyping revealed a single origin of each deletion, with most recent common ancestor estimates of 3000-8000 and 6000-14 000 years for the deletions in KLK9 and KLK15, respectively. The presence of the deletions on the same haplotypes in 1000 Genomes data of both European and African populations indicate an early origin of both deletions. The old age in combination with homozygous presence of loss-of-function variants suggests that some kallikrein-related peptidases have non-essential functions.