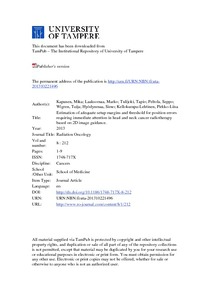 We estimated sufficient setup margins for head-and-neck cancer (HNC) radiotherapy (RT) when 2D kV images are utilized for routine patient setup verification. As another goal we estimated a threshold for the displacements of the most important bony landmarks related to the target volumes requiring immediate attention.
Methods

We analyzed 1491 orthogonal x-ray images utilized in RT treatment guidance for 80 HNC patients. We estimated overall setup errors and errors for four subregions to account for patient rotation and deformation: the vertebrae C1-2, C5-7, the occiput bone and the mandible. Setup margins were estimated for two 2D image guidance protocols: i) imaging at first three fractions and weekly thereafter and ii) daily imaging. Two 2D image matching principles were investigated: i) to the vertebrae in the middle of planning target volume (PTV) (MID_PTV) and ii) minimizing maximal position error for the four subregions (MIN_MAX). The threshold for the position errors was calculated with two previously unpublished methods based on the van Herk’s formula and clinical data by retaining a margin of 5 mm sufficient for each subregion.
Results

Sufficient setup margins to compensate the displacements of the subregions were approximately two times larger than were needed to compensate setup errors for rigid target. Adequate margins varied from 2.7 mm to 9.6 mm depending on the subregions related to the target, applied image guidance protocol and early correction of clinically important systematic 3D displacements of the subregions exceeding 4 mm. The MIN_MAX match resulted in smaller margins but caused an overall shift of 2.5 mm for the target center. Margins ≤ 5mm were sufficient with the MID_PTV match only through application of daily 2D imaging and the threshold of 4 mm to correct systematic displacement of a subregion.
Conclusions

Adequate setup margins depend remarkably on the subregions related to the target volume. When the systematic 3D displacement of a subregion exceeds 4 mm, it is optimal to correct patient immobilization first. If this is not successful, adaptive replanning should be considered to retain sufficiently small margins.