Dynamic logistic regression model and population attributable fraction to investigate the association between adherence, missed visits and mortality: a study of HIV-infected adults surviving the first year of ART 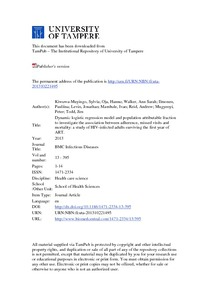 Adherence is one of the most important determinants of viral suppression and drug resistance in HIV-infected people receiving antiretroviral therapy (ART).
Methods

We examined the association between long-term mortality and poor adherence to ART in DART trial participants in Uganda and Zimbabwe randomly assigned to receive laboratory and clinical monitoring (LCM), or clinically driven monitoring (CDM). Since over 50% of all deaths in the DART trial occurred during the first year on ART, we focussed on participants continuing ART for 12 months to investigate the implications of longer-term adherence to treatment on mortality. Participants’ ART adherence was assessed by pill counts and structured questionnaires at 4-weekly clinic visits. We studied the effect of recent adherence history on the risk of death at the individual level (odds ratios from dynamic logistic regression model), and on mortality at the population level (population attributable fraction based on this model). Analyses were conducted separately for both randomization groups, adjusted for relevant confounding factors. Adherence behaviour was also confounded by a partial factorial randomization comparing structured treatment interruptions (STI) with continuous ART (CT).
Results

In the CDM arm a significant association was found between poor adherence to ART in the previous 3-9 months with increased mortality risk. In the LCM arm the association was not significant. The odds ratios for mortality in participants with poor adherence against those with optimal adherence was 1.30 (95% CI 0.78,2.10) in the LCM arm and 2.18 (1.47,3.22) in the CDM arm. The estimated proportions of deaths that could have been avoided with optimal adherence (population attributable fraction) in the LCM and CDM groups during the 5 years follow-up period were 16.0% (95% CI 0.7%,31.6%) and 33.1% (20.5%,44.8%), correspondingly.
Conclusions

Recurrent poor adherence determined even through simple measures is associated with high mortality both at individual level as well as at the ART programme level. The number of lives saved through effective interventions to improve adherence could be considerable particularly for individuals monitored without using CD4 cell counts. The findings have important implications for clinical practice and for developing interventions to enhance adherence.