Presentation of Russians in Aamulehti and Kansan Lehti:Pro-and Anti-Russian Propaganda in Fight for the Public Opinion 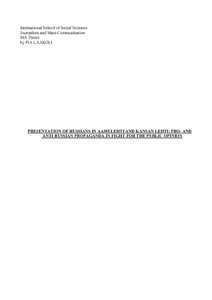 Tiedotusoppi/ISSS - Journalism and Mass Communication/ISSS
This publication is copyrighted. You may download, display and print it for Your own personal use. Commercial use is prohibited.

In this thesis I will examine the image Aamulehti and Kansan Lehti gave of the Russians and how propagandistic methods were used in building that image. The interest lies in the way the image of Russians—positive and negative—was moulded to correspond with political aims; how both sides of the Civil War (the Reds and the Whites) used the image in rallying up for public approval and support for their respective causes in 1917-1918. I concentrate on identifying the image of a Russian and detecting the changes that image went through during 1917. In the process I aim at dissecting some of the propagandistic methods that were used in creating the image and later on, shifting it towards the direction where it could be used to agitate people for Civil War.

My research findings were interesting to say the least. The official history has always maintained that the relationship between the Finnish Social Democrats and Russians was one with degree of camaraderie, mutual understanding, co-operation, hence making the general assumption that Social Democrats had a positive image of Russian troops. This was also the platform my hypothesis was based upon; that Kansan Lehti—being the voice of Social Democratic Party—would project a positive image of Russians to its readership. But as the empirical data indicates this did not happen: the image Kansan Lehti projects from January through March is that of no image at all and from July to Semtember the image of Russian is very negative, even more so that that projected by Aamulehti.

From January through March also Aamulehti shows no interest towards Russians, from July to September—while Kansan Lehti is ranting about cruelty of Russian troops—Aamulehti maintains its neutral attitude towards Russians. From November 1917 to January 1918, which is the final sample period, Aamulehti projects a negative image of Russians, whereas Kansan Lehti for the first time presents Russians in rather neutral light.

There are also few other surprises, which this research has come across; major one of them being the association or reference in which the Russians were presented. The first sample period, from January through March, provided no association what so ever, the second sample period from July through September provided no real surprise, for both newspapers presented the Russians in association of themes described by official history: that of mischief and limitations on regained sovereignty.

It is the third sample period, which brings us the surprise, at least when it comes to the association in which Kansan Lehti presented Russians. During third sample period Aamulehti rather predictably associates the Russians with Finnish Social Democrats in mischief, however, Kansan Lehti unpredictably presents Russians in connection to much hated Finnish bourgeois and to dark period in Finnish history: the Oppression periods. What is remarkable in here is that both newspapers perceive Russians negatively because of their association and assumed co-operation with the Finnish “opposing side” i.e. it is the Finns who give bad name to Russians.