Role of the media in fighting poverty in Tanzania 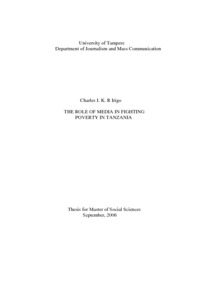 Poverty is linked to powerlessness, injustice and exclusion. The primary concern of this study is to empower the people at the grassroots level of the society through the agency of the media in order to fight poverty. The study is based on the conviction that an increase use of grassroots level news actors in the media will motivate these people and empower them so that they play an active role in their endeavor to fight poverty.

The study starts with an overview of earlier studies on development communication in the developing poor countries. It discusses the theories of development journalism and proposes the adoption of an alternative news genre based on the multiplicity paradigm. Poverty, a multidimensional phenomenon and which the media is expected to contribute in its fight, is defined. The initiatives in poverty reduction strategies by both Tanzania and the international community are discussed.

The study task involved content analysis of popular newspapers and newsreel radio broadcasts in Tanzania. The data collected from the quantitative analysis together with the general observations on how poverty was covered in the media are reported.

The study conclusively found that the media in Tanzania is not doing enough in fighting poverty given the magnitude of the problem and the current national and international discourse of poverty led by the United Nations. The Tanzania media still apply the dominant practice of an elite-bias news style based on the conventional definition of news. The news genre that is appropriate for the empowerment of the people at the grassroots level is recommended. This new news genre should be introduced cautiously and slowly. This is because many people have comprehension problems with a new style of news which give prominence to the ordinary people as the main news actors to the disadvantage of the politicians and other bureaucrats. Specific action based recommendations on how to achieve this change are given to both the media and the government through its National Strategy for Growth and Reduction of Poverty ­ MKUKUTA policy framework.