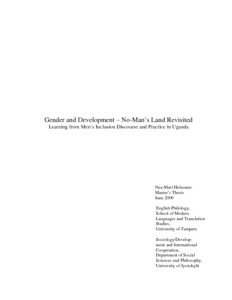 Englantilainen filologia - English Philology
This publication is copyrighted. You may download, display and print it for Your own personal use. Commercial use is prohibited.

This multi-disciplinary study was conducted as part of two Master’s Degrees: in Arts and in Social Sciences. The aim of the study is to examine how men as beneficiaries are included in the gender and development (GAD) approach in development cooperation at the levels of discourse and practice in Uganda. The study aims at providing a case for learning, and initiating discussion and advocacy on more male sensitive approach to gender and development.

The primary data consists of ten semi-structured thematic interviews of the staff members of the organization World Vision Uganda on their perceptions and experiences on gender and development in Uganda. The secondary data consists of discussions with community members and organization staff as well as documents and literature. The analysis is divided into two: critical discourse analysis and transitivity analysis of the discourse of GAD, and social scientific analysis of the practice of GAD, both of which are qualitative in this study.

It can be concluded that GAD in Uganda is highly consistent with the overall tendency of the GAD approach as more preoccupied with women leaving male beneficiaries in the margin. Moreover, the manner of inclusion is not consistent with gender mainstreaming principle but derives from arguments based on needs rather than rights. However, there is openness to men’s inclusion through the concept of gender partnership at both the discursive and practical levels in Uganda. Recommendations include acknowledging and encouraging men’s role at policy level, moving away from bipolar conflict premise in gender work, learning from contextual responses to men’s inclusion, engaging discourses in sharing experiences via discussion forums, and taking a holistic approach aiming at increasing the welfare of the household as the scene for gender equality work.