Knocking the Doors: The Situation of Visible Immigrants in the Finnish Labour Market 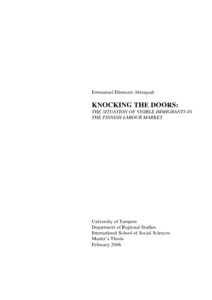 There is high unemployment among immigrants living in Finland, especially, the visible ones and their situation seems to be worsening as more and more immigrants are coming from other parts of European Union. So this study is to create the awareness that immigrants are not a burden to the Finnish society but rather are a source of man power to fuel the Finnish economy. The purpose of this research is to demonstrate that immigrants are disadvantaged in the Finnish labour market due to their lack of formidable networks that would assist them to the labour market accession. Furthermore, it demonstrates that visible immigrants, who have been able to access the labour market permanently, have done that through their existing network or “middleman”.

The data used for this study was in part, based on my experience in the labour market as a visible immigrant, and the experiences of few others that I observed and interviewed on the one hand, and interviews with gatekeepers (employers and those working with immigrants) on the other, Theses two sources of information provided adequate information for the study. In addition to that, existing records and researches on immigrant issues were also exhausted.

Using qualitative methods this study examines the situation of visible immigrants through the theory of dichotomy and split labour market, and suggests network building as solution to this phenomenon. The findings indicate that there are number of reasons attributed to the existence of high unemployment rate among immigrants and most especially the visible ones, other than language skills and education. There is lack of trust between the two parties creating the way for “middle men”. Thus the theory of dichotomy and the split labour market explains vividly why most visible immigrants have unstable labour market status.

The result also depicts that social networks have played a key role for some visible immigrants in labour market accession. Thus a formidable immigrant network is recommended for visible immigrants to build strong and trustworthy tires with the key institutions and the society as a whole

The findings of this work will assist and share light on immigrants’ accession of the Finnish labour market, and also for policy makers in formulating policies concerning immigrants.