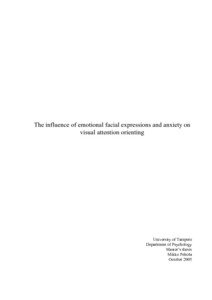 It has been argued that elevated anxiety is characterized by an attentional bias for threatening stimuli in the environment. That is, anxious individuals allocate attentional processing resources disproportionately toward threat material, such as angry faces. However, so far there is no agreement on the exact mechanisms of attention, responsible for such bias. Research regarding the time course of attentional processes has raised a debate, whether anxiety is associated with threat-related biases in initial shifting of attention, or with subsequent difficulties in disengaging attention. Recent experimental evidence suggests a role for disengagement difficulties in anxious individuals, manifested in increased dwell time on threatening stimuli.

The present study sought to replicate and extend the finding that the disengagement component of visual attention is biased in anxious individuals. The spatial cueing paradigm, with angry, happy, and neutral schematic faces as attentional cues, was administered to high and low trait anxious groups (n=25 and 24, respectively). In this task, the participants were required to detect peripherally presented targets, which were preceded by cues. The cues in the present study were non-informative, i.e., they did not predict the location where the target would appear. As a novel feature, four stimulus-onset-asynchrony (SOA) conditions were employed to enable a more detailed analysis of the time course of attentional processing.

At the shortest SOA of 200 ms, the basic pattern of facilitation with valid cues was found only with happy faces. All other SOAs resulted in significant inhibition of return (IOR), as expected. However, the anxiety groups did not differ in their reaction times (RTs) as a function of cue valence. Thus, the present study did not reveal any meaningful group differences in the processing of threatening stimuli. Possible reasons for the absence of facilitation and meaningful group differences include forward masking, direction of the contrast polarity of the display, state anxiety levels of the participants, and the threat value of the angry faces.