Analysis of cDNA microarray data: Changes induced by activation of protein kinases C and A in gene expression of a human T cell line 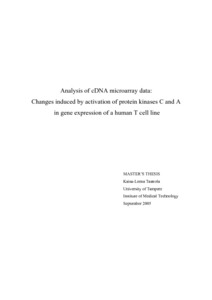 Background and aims: Protein kinases C (PKC) and A (PKA) are central signalling molecules in T cell activation and are involved in regulating gene expression. A viral accessory protein, viral protein R (Vpr), may interfere with their functions in human immunodeficiency virus type 1 (HIV-1)-infected T cells. The aim of the study was to design and apply pre-processing and analysis methods for cDNA microarray data to explore changes caused by PKC and PKA activation on Jurkat T cell gene expression and the influence of Vpr therein.

Methods: The microarray data analysis included removing missing and saturated intensity values. Background correction and averaging replicate spot intensities were ensured to be suitable methods to increase data reliability. Aberrantly deviating replicate observations were excluded before the averaging. Lowess normalisation was used to centralise the data and to correct non-linearity. The data was also standardised. Genes having at least 2-fold change in expression were considered differentially expressed. Their ontologies were studied.

Conclusions: The methodology presented can assist in future design and analysis of microarray data. The results support the previous knowledge that DAG/PKC signalling is involved in mediating processes important for T cell activation. Suggested additional microarray experiments could reveal more genes regulated by both signalling pathways and increase the statistical significance of the presented results.