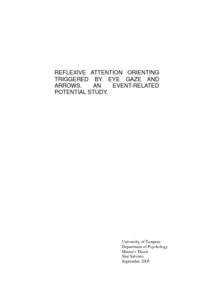 The present study explored attention orienting by biologically relevant eye gaze cues and symbolic arrow cues. Participants were 19 university students aged 19-26 years (mean 22 years). Behavioural and EEG data (event-related potentials) were measured and analysed. The purpose of the study was to explore whether eye gaze and arrow cues result in similar reflexive attention orienting and whether the attention orienting effects observed in previous studies are based on similar underlying neural mechanisms. In previous behavioural studies, shorter reaction times have been observed in congruent trials (trials, where the location of the target stimulus is validly cued), than in incongruent trials (trials, where the location of the target is cued invalidly) or neutral trials (trials, where the location of a target is not cued). In event-related potential studies, eye gaze cuing has resulted in shorter latencies and enhanced amplitudes of the visual components P1 and N1, whereas symbolic cues have normally resulted only in amplitude enhancements. In the present study, both eye gaze and arrow cues resulted in shorter reaction times in congruent than in incongruent or neutral trials. There were no significant differences in reaction times in neutral and incongruent trials. The results indicate that the shorter reaction times in congruent trials for both types of cues reflect facilitation in the processing of congruent stimuli (a benefit effect) without there being any cost in the processing of unattended stimuli. Event-related potential recordings showed that both eye gaze and arrow cues resulted in speeded and enhanced P1 and N1 components of visual attention. The results were not fully conclusive but rather electrode-dependent. Some distinctive effects of cue type were observed in amplitudes of the components. Both components peaked faster in gaze than in arrow trials. The different time course of visual components between the two cue types may be an indication of separate underlying neural mechanisms for reflexive attention orienting by the two cue types. However, despite the different time course for the two cue types, there were little distinctive effects, which may indicate that eye gaze and arrow cues may share at least some similar attentional processing mechanisms. Further studies are proposed to address the issue by using a similar spatial cuing paradigm.