Blind Interaction Technique for Touchscreens “A full keyboard under the fingertip” 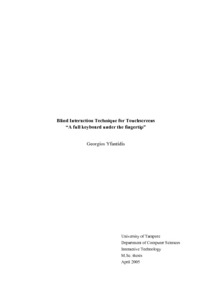 This thesis is dealing with the design and evaluation of a novel text entry technique that is accessible to visually impaired users. The technique is specifically designed for touchscreen interaction on smart small mobile devices that are becoming very widespread. Already developed techniques cannot offer a comprehensive and fast solution for blind text entry, because they cannot overcome the speed-accuracy trade-off.

The developed blind text entry technique described here, named Gesture Driven Software Button (GDSB) has two built-in modes that allow both concurrent and sequential text entry. The concurrent mode allows a typing speed in the range of 16-20 wpm after two hours of training, in the blind condition. The sequential mode used an adaptive dwell time interaction that accesses the three layers of the character layout with the use of waiting time. This mode also allows single-hand manipulation that enhances the universal appeal of the GDSB. Core characteristics of the technique are: its constricted size, robustness, structuredness and simplicity of interaction. The GDSB uses simple tap and slide interaction, and it is transparent, meaning that it does not occupy any display area because it is not needed to be visible.

To determine the usability and the performance of the developed technique, three tests were carried out, with the participation of 44 subjects in total. The finger interaction with desktop touchscreen monitor was investigated in the pilot test and the results have been used when designing the advanced version of text entry technique for stylus-based interaction in smart mobile devices. Because of the positive results received after the first test, a second test was arranged for stylus-based interaction on a PDA. Results of the first test were reconfirmed by the second, and a series of new findings was revealed. The overall results of the testing showed that the technique is indeed having real interaction advantages and with its comfortable typing speed it can be an all around text entry solution for mobile devices for both sighted and blind users.