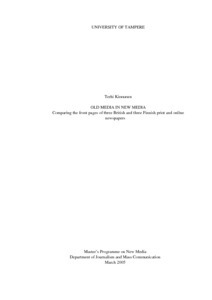 This Master’s thesis explores the front pages of three Finnish (Helsingin Sanomat, Aamulehti and Kaleva) and three British print newspapers (the Guardian, the Daily Telegraph and the Times) and their online outlets. The study focuses on news stories introduced on the front page and the main method used is descriptive content analysis.

Comparison is made across media (print versus online) and across countries (Britain versus Finland). Two general questions aimed to be answered are: how the Internet has affected newspapers, what differences can be found in Finnish and British journalistic cultures. The data was originally gathered for European A COST A20 project, which studies Internet’s impact on mass media.

It was found in this study that British and Finnish newspapers do not differ from each other greatly. The largest amount of space on the front page is devoted to news in print and online. Domestic news is the most popular geographical location of news stories. The most popular topics were politics, economics, crime and safety.

Online newspapers do not use the potential web publishing offers. Personalisation is nonexistent. Multimediality and hypertextuality, linking outside own outlet is shallow. All six online newspapers studied in this sample mimic the content and the form of print newspapers. News stories are shovelled from print paper to online. Photographs and info-graphics are used to illustrate news pieces.