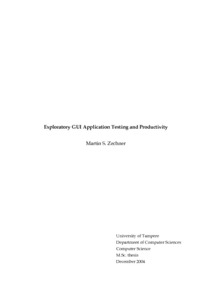 Traditionally, graphical user interface (GUI) application design is quite difficult and the only reliable way to achieve good interfaces is through iteration, taking feedback from testers and end-users into consideration. It is exactly this iteration and change to the interface which makes GUI application testing demanding. Requirements may be vague and become clearer once the system evolves, or they may change altogether. Scripted testing, a testing method whereby test cases are generated early during software development, based on requirements and other relevant specifications and then executed, may prove to be an inefficient way on its own.

Exploratory testing, sometimes referred to as ad hoc testing and best described as ”learning, test design, and test execution at the same time”, may be one new testing approach. Currently there exists no research related to the possible benefits in terms of testing productivity of exploratory testing over scripted testing, except for some anecdotal evidence.

This work concentrates, by means of a case study, on whether the use of exploratory testing in addition to the more “traditional” script based testing, within the scope of GUI-based application testing, could result in more and relevant defects found than with traditional script-based testing alone, i.e. could result in a higher testing productivity.