Aspects to the European integration process in context of the Czech Republic: Models of Europeanisation and the possibilities of bottom-up development. 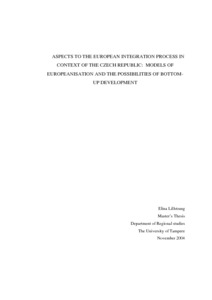 Aluetiede - Regional Studies
This publication is copyrighted. You may download, display and print it for Your own personal use. Commercial use is prohibited.

The enlargement of the European Union that took place in May 2004 offers one of the most interesting and topical subjects for study. In this research the Visegrad countries of Czech Republic, Slovak Republic, Hungary and Poland are in the main focus. So far the enlargement process has been mostly seen and interpreted through the traditional integration theories, especially federalism and functionalism. On the other hand, the word Europeanisation is nowadays a term commonly used while referring to the process of West European integration. New Member Countries with their different background pose a totally new challenge for study.

The aim of this study is to understand the effects of the enlargement within the sphere of governance as interpreted through the different theories of integration. This study also aims at finding the importance of the role of the bottom-up development model in actualising the effects of integration. And finally, this research aims as finding and analysing the Europeanisation patterns taking place in the new Member Countries by using Czech Republic as a case example country.

Hence, both the past and the present theories of European integration are assessed in order to evaluate how well they can be used in interpreting the process of the enlargement. The empirical material for this research is gathered from Czech Republic in the form of thematic interviews. Interviews were performed in three different levels: among the representatives of the state officers, academia and mayors of municipalities who represented the grassroots approach. Also participatory observation in the local level was used as a method gaining information.

The results gained in this study seem to indicate that the process of integration as seen through the theories of functionalism, federalism and Europeanisation all lack one possible aspect of effect. None of these models stress or evaluate the significance of the bottom-up development in the process of European integration.

According to this research, the Europeanisation process taking place in Czech Republic is a three stage process. In the first stage the EU is the launcher of Europeanisation process in the country. Through its acquis communautaire the Union is making the nation accept its behaviour modes. During the second stage the Czech government is “Europeanising” the country accordingly to its interpretation of the Union. In the third stage, which is now taking place only in its preliminary form, the local level actors through bottom-up development and EU financed programmes make the Czech inhabitants “become more European”.