A Review of the Right to Communicate: Possibilities of Communication Rights in an Information Society. 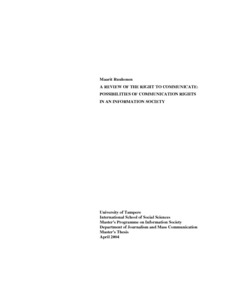 The aim of this study is to explore the different definitions of the right to communicate since the emergence of the concept and bring the debate to the 21st century. The concept has become a debated issue again in connection to the development of an information society. The framework of the study is human rights and international law.

It was found in this study that the framework of the debate has changed, but its surrounding issues and controversies remain. Essentially, the idea that a new human right should be added to the existing catalogue of human rights provokes the underlying, often oppositional viewpoints of the relation of the right to communicate to freedom of expression which is seen, particularly by the press freedom community as an absolute freedom that should not be limited. Furthermore, a strong view is advocated that because even the existing information rights are not fully realized, a new right should not be developed. An analysis of how the issue of communication rights was approached in the World Summit on the Information Society suggests that on certain controversial issues, the debate has not moved beyond the previous debate on NWICO in the 1980s even if the framework of the debate is different with the prospect of globalisation, global civil society and information society.