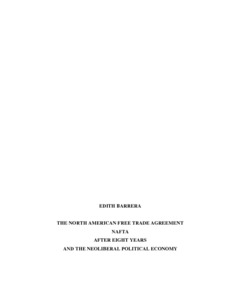 This thesis mainly presents in a “broad sense”, the impact of the North American Free Trade Agreement in each of the member states. As I recapitulated the stages of the Free Trade Agreement in 1988, between the United States and Canada and later on, the inclusion of Mexico in 1994. Apart of the consequences of the NAFTA. I will also emphasize some of the results of the neoliberal political economy and the structural adjustment that has taken place since the late 1980’s in each member state.

It is also important to observe the phenomenon of NAFTA as a consequence of the end of the cold war era, as I will discuss in the first chapter. NAFTA seems to be a reaction of the new regional blocs in order to compete in the international market, and at the same time to count with its “own protection path” against this international competition, in which the biggest and strongest market economies are the winners. As I will mentioned in chapter 3.

It is time to rethink the Free trade, where is it leading? who are the real winners? what can we do to have a fair trade? what is the mechanism to protect our own markets? and what happens to the welfare states?

The analysis in this paper will be based on the specific data from different studies groups of each member state. The impact of NAFTA in labor, agriculture, and the development of the trade since it started until now.

One of the most important aspects of this thesis is to called attention to the international community as observers and why not, as an activist, and to present the outcome of this neoliberal economy, and the unfair Free trade.

As a political scientist, I have the responsibility to warn those countries that “think” that the key to their development is a Free trade and a neoliberal economy. In this case, is not so, we have to be careful and react against to some of the accords of the treaty, if we want to have a fairly trade.