Snowchange and Temporal Borders of the Northerm Indlgenous Nations - A Geopolitical Inquiry of Sapmi, Sami of Finland and the Russian Federation 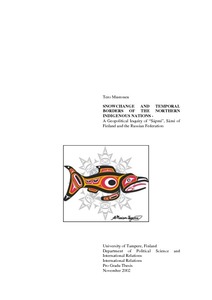 This research explores the temporal, spatial and political scapes of the Northern Indigenous Nations and peoples, such as the Inuit, Inuvialuit, Tahltan, Sámi and the Nenets nations. Most, though not all, of these Nations live in the areas which are usually referred to as the Circumpolar Arctic. In the Arctic, the past 300 ­ 400 years have seen different forms of colonialism taking place. The extent and quality of the colonialism differs, but the impact on the Indigenous ways of knowing, living and surviving remains the same all across the North. In this inquiry, a critical geopolitical assessment of the current situation has been made regarding the Indigenous and Arctic International Relations. Recent years have seen a massive emergence of Indigenous land claims and selfgovernance agreements, especially in Canada. This re-emergence of Indigenous governance has been hailed as progressive process leading to the post-colonial Arctic. More close evaluation of the Canadian context, Final Agreements and land claims shows that these tools of post-colonial governance operate within nation-states and reflect public bodies of governance.

In Sápmi, Sámi homeland in the European North, a similar discourse of Indigenous governance and land claims has started. In this paper, using comparative methods of International Relations, the models, quality and extent of the experiences between British Columbian First Nations and the Sámi of the European North and Russian Federation are discussed. The specific assessment of the study is the quality of the demarcation borders in the Canadian, Russian and Finnish context.

Building on the Indigenous text and discourse on the other hand and on the other relying on the critical geopolitical paradigm of the International Relations, the paper explores critically the quality of time, space, political scape and governance in the target cases. Building on this reflective, innovative dual manner, assessment has been made that the model of self-governance that reflects European structures and models within nation-states is not honouring the traditional governance, time, place and life-world experience of the Northern Indigenous Nations.

Building on field interviews in Russia, Canada, Sápmi, Finland and Norway, the author sketches new tools for understanding the Indigenous time, place and politics. A tool “snowchange” is introduced to intepret non-linearities of this process, and within this the temporal borders, reflecting the seasonal cycles of nomadic movements, stretch out to meet and greet the Indigenous experience within the new critical geopolitics of the Arctic. Relevance of this new interpretation will affect environmental policy, climate change assessments, political science, Indigenous policy and minority­majority relations. In the end, the assessment of feasibility of Sápmi for the current era is discussed, also in the context of post ­ September 11th 2001 world politics, current Russian political process and the European Union policy of Northern Dimension from 1997.