Mystery of Mothers on the Labour Market. Comparison of the Differences in Labour Market Participation of Married Mothers with Small Children in Germany and Finland during the 1990´s. 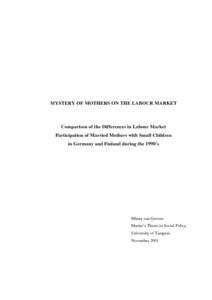 The aim of the study is to view and explain the differences in the labour market participation of mothers of young children during the 1990's in Germany and Finland. The analysis is based on cross-national comparison of the labour market participation of the mothers during the period while the children are still very young (0-3 years) in two different countries.

In order to explain the societal differences in labour market participation of women in Germany and Finland two different theoretical approaches are used: the welfare state regime models and gender arrangement approaches. The research method of cross-national comparison is used viewing two European countries. The empirical part of the research consists of existing studies and literature in the field of social research as well the cross-national statistical description used so far as it is possible on the basis of secondary data.

This study seeks also answers to the cross-national differences. It views the institutional ele-ments, such as family, welfare state and family policies and labour market, whether they can ex-plain the international variations in labour market behaviour of mothers. The analysis finds out that these elements can partly contribute to explanation, however, not totally. The analysis has to include also the element of culture in order to fully understand the surroundings where the moth-ers perform and make decisions of their employment. The mystery of labour market participation differences of mothers can be solved after placing the institutional elements in a cultural context.