The image of Saint-Petersburg in Nordic and Baltic countries 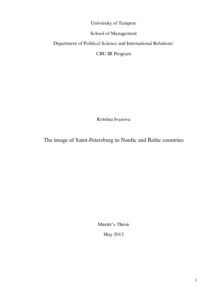 The research project is based on social constructivism theoretical framework and the image theory. The methodological bases of my research are the following: the analytical method used in identifying and studying the characteristics of St. Petersburg; the comparative method, which provided a framework for comparing theoretical data regarding the city's image; and the historicism method.

During work on my master thesis it was found that under the conditions of globalized culture, the borders surrounding a city’s image are slowly being eroded.  Now, the way a city’s residents perceive their city’s image hardly differs from how foreigners do. If earlier each country had its own image of St. Petersburg, at present, the image of the city in Estonia, Latvia and Finland does not differ from its image among locals.

Thus, due to globalization processes that contributed to the merging of internal and external images of the city, as well as the city’s branding in the countries surveyed, St. Petersburg has an image of a unique, inimitable city. It is considered one of the important centers of Russia, a city with an amazing history and unique monuments. In general it can be said that St. Petersburg has a special significance for Finns, Estonians and Latvians, as well as for its residents. First of all, it is considered a European, cosmopolitan metropolis, unlike other Russian cities.