The nexus of Politics and the Economy: A Case Study of Russian-German Relations 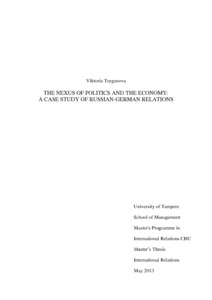 In my Master thesis I focus on research of the nexus of politics and the economy on the example of Russian-German Relations. The object of study is economic and political relations between Russia and Germany. Economic cooperation between two countries is rather intensive and it has developed well during the last decade. It promotes to the intensification and improvement of cooperation on other fields, such as political, cultural, and leads to the strengthening of good-neighbor relations. Trade-economic cooperation between our countries has been beneficial for both, indeed. This increases openness in relationship and contributes to the equal partnership between Russia and Germany.

In this research project I concentrated on the analysis of the trade-economic relations and the key aspects of this field of cooperation between Russia and Germany. In addition, I aim at examining ofarchitecture anddynamics of Russian-German political relationswithin the contemporary globalization process.

Firstly, the aim is to consider different approaches to the definition of transnational theory and to analyze the research of the well-known theorists who dealt with the study of this concept. Secondly, I will seek to clarify the most widespread transnational processes encountered in international practice. And lastly, I will evaluate the notion of “transnationalism” from different perspectives, predominantly focusing on the economic point of view.

The results of the research have shown that relations between Russia and Germany are strategic and mutually beneficial.